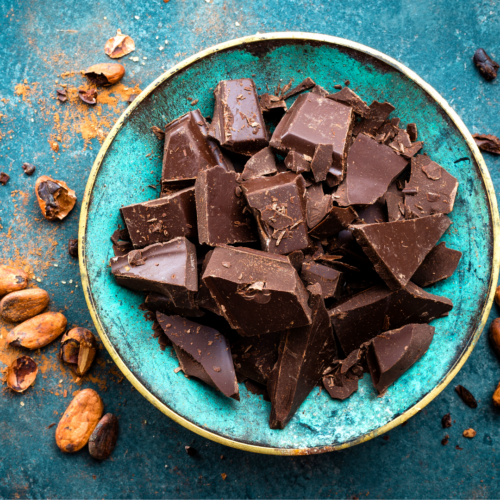 According to the Food and Drug Administration (FDA) 400 milligrams a day of caffeine for healthy adults has generally been deemed a safe amount. This equates to about four or five cups of coffee. Individuals who are pregnant or have specific health conditions (such as cardiovascular disease) should consume much less amounts or may need to completely avoid caffeine altogether.

According to the United States Department of Agriculture (USDA) Food Composition Database, here are some standard caffeine amounts in the following containing foods:

Some people are more sensitive to caffeine than others, especially those who do not consume caffeine containing foods or beverages regularly. Those that are more sensitive to caffeine my experience a slight difference such as an uptick in energy levels and alertness even when caffeine is consumed in small amounts. This is not unique to chocolate however, and such effects may be noticed from consuming other caffeine containing foods and beverages such as tea or coffee. When it comes to chocolate, a rule of thumb to remember is the darker the chocolate, the higher the caffeine content.

The scientific literature suggests that consuming caffeine at doses less than 400 mg/ day is generally safe. The quantity of caffeine found in chocolate in comparison to other common sources of caffeine, has very little stimulating effects in the majority of people. Therefore eating chocolate before bedtime is generally safe. If you’re susceptible to the effects of caffeine, you should listen to your body, and when you want to indulge in caffeine containing foods such as chocolate, watch your portion sizes, don’t consume it close to bedtime, and think of opting for milk or white chocolate instead. For additional guidance, speak with a Registered Dietitian for nutritionally sound information tailored specifically to your needs.

We maintain the safety of your personal information by implementing security measures to protect against unauthorized access, alteration, disclosure of your personal information, transaction information and data stored on our Site. Sensitive and private data exchange between the Site and its Users happens over a SSL secured channel and is protected and encrypted with digital signatures. Use of information on this website does not constitute a doctor-patient relationship, or a health provider –patient relationship. Any reproduction of materials without authorized consent is forbidden. By using our site, you consent to these terms and conditions. 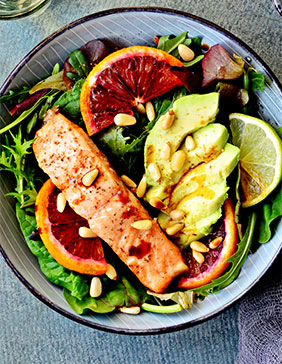